The Long Road Back to Soundness 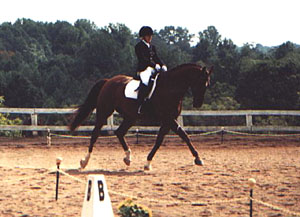 Above: Artie and Linda in action. A barefoot program helped him regain his soundness and movement. Photo courtesy Linda Fragale.

Three years ago, after just receiving the final score I needed to obtain my USDF Bronze Medal, my Third Level horse, Artist (Artie), came up lame. Actually, it started over the course of several months, with a training session here and there where he felt the all-too-familiar “not quite right.” Sometimes he felt lame in the hind end; then after getting re-shod, he felt lame in the front.

Finally, one day Artie was put into the wrong paddock, and so he ran all over the place—only to come up obviously lame the next day in the left hind. This time, the lameness persisted. I then called out the vet. My regular vet was out of town, so her temporary replacement came out; he specialized in lamenesses. He did a full workup and watched him lunge. In watching the horse go, he confirmed the left hind lameness, but also commented that the horse appeared short on his left front, also. We focused on the hind end, since it was a more pronounced lameness. After several nerve blocks, we narrowed the problem (we thought) down in the fetlock area. A sonogram presented an area in the deep digital flexor tendon that looked like a tear. He said this can be a career-ending injury (to which I sobbed). He recommended surgery at Morven Park.

So I took Artie to Morven Park; they re-sonogrammed the leg, and the spot that the other vet had seen was also evident on the other leg—so that was apparently a normal “spot” for this horse. They did, however, say that the annular ligament was thickened and that it needed to be split to allow more flexibility in the joint. They said THAT was causing the lameness.

So Artie was left at Morven for surgery. They went in and split the ligament and said that, while they were in there, they found a tear in the superficial flexor tendon and they repaired that, as well. That tear did not show up on the sonogram. Rehab, of course, included lots of stall rest and hand-walking, until the follow-up appointment with the vet several weeks later. On re-examination, the horse was sound. So I was off to my slow riding build-up (walking, to one min. trot, then 2 min., etc.).

Artie stayed sound for a couple of weeks, then went lame, so I took him back to Morven. Then I was told that the horse had been lame from the tear in the tendon—not the thickened annular ligament (reverse of what I was told before). On examination again, they then went up the leg and determined that he was lame in the hock. I couldn’t buy that, but let them x-ray and inject his hock. A couple of rides later, the horse went lame again. I took him back up to Morven, at which point they said the lameness was in FRONT, and to put shoes on him. Took him home, put shoes on. Still lame… Now we are into almost a year of this nonsense, and I still have no diagnosis.
My vet came out and recommended putting degree pads on the left hind, to shorten the tendon and offer it some relief, then slowly lower the pads until they were not needed. I was skeptical, but thought I had nothing to lose, and put them on. One week later, I realized that was a huge mistake, and pulled all the shoes and threw Artie outside 24/7.

Totally frustrated and out of money, I posted a notice on Ultimate Dressage website about donating my horse. I received a response from a girl in South Carolina who said she has had a lot of success w/rehabbing horses just like Artie—please send her a tape, so she could take a look at his movement (I had videos of him from shows.) She was instantly interested, and commented that it should take several months, but that he should go sound, and she would see how far he was willing/able to go in dressage. I replied that apparently she should have been a VET, because how did SHE think she would make my horse sound. Once she found a trailer to borrow, she would be on her way to pick up Artie.

She had told me what the rehab would consist of. She does a high performance barefoot trim—no farrier I had ever met had done that. She left the horses out 24/7, to provide constant movement, particularly for the rehab horses, as more movement/more blood flow means quicker healing. This apparently had worked for horses she took that had foundered, who had “navicular,” were extremely contracted, etc. Meantime, I started corresponding with a woman in Canada, Lisa Huhn with Equinextion, who was telling me the same things this other girl was. I visited the Canada website and studied all the articles and case stories. Two days before the SC girl was to pick up Artie, I cancelled on her! I wanted to try this different approach; what did I have to lose?

This new barefoot approach takes into consideration the whole horse, the mechanics of the foot and how to trim the foot to allow the foot to function properly. When the foot is allowed to work properly and WITHOUT SHOES, virtually any undesirable problem with the horse can DISAPPEAR!!! The biggest example is the “NQR”—“not quite right syndrome”; also navicular, founder, laminitis, contracted heels, white line disease, thrush, heaves, hives, other skin problems, girthiness, head tossing, training “issues,” the list goes on... they DISAPPEAR.

So many times, vets go everywhere but the foot to diagnose lameness issues. But over 90% of lamenesses occur in the foot! NOW I had an explanation as to why the vets could not diagnose my horse’s lameness. I do believe that it started out as a soft tissue problem behind, caused by compensating for pain. Then the front foot lameness obviously came from the (shod) front feet.

As I think back over the past several years of working with Artie when I could NOT get a light canter even though he was BORN uphill—his movement had been deteriorating, but he was such a big, scopey mover that the change was overlooked/not really noticed.
I now have a whole barn full of barefoot horses who move better than they EVER have, and are as healthy as can be. I have also had Lisa Huhn, the woman from Canada, down twice to get us started on the high performance barefoot trim, and I am now trimming my own horses, as well as a few outside horses.

Three years later, and we just competed in a show at Morven Park that was the three year anniversary of the last show I had done with Artie. He was brilliant, sounder than ever and got a 65% on Second Level Test 2! His movement as a two year old is back and here to stay!

I beg anyone who is struggling with soundness issues to pursue this new barefoot approach! Even if your horse is “sound,” please consider barefoot, and be amazed at the improvement to your horse’s performance and behavior.

About the author: Linda Fragale has a B.S. Degree in Equestrian Studies and is a USDF “L” graduate, judging schooling shows throughout Virginia. She has competed through Third Level Dressage and Training Level Eventing. She has been teaching for over 20 years and has worked with students of all ages, including working extensively with Pony Club.


©2006 by The Horse's Hoof. All rights reserved. No part of these publications may be reproduced by any means whatsoever without the written permission of the publisher and/or authors. The information contained within these articles is intended for educational purposes only, and not for diagnosing or medicinally prescribing in any way. Readers are cautioned to seek expert advice from a qualified health professional before pursuing any form of treatment on their animals. Opinions expressed herein are those of the authors and do not necessarily reflect those of the publisher.