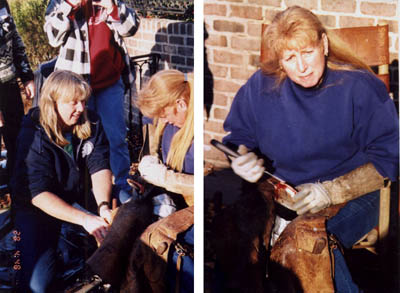 Left: Anne "Tree" Coley and Nancy Filbert dissecting a hoof. Proof that blondes have more fun! Right: Nancy listening intently to a question about the dissection.

February, 2004: Nancy Filbert, CHSH/SHP flew in from the northern Wisconsin just as a winter storm with high winds came up from the South and dumped 12 inches plus on NC through the night. However, her flight Thursday night was completely uneventful as was our trip to and back from the airport to get her. Then, boom, the next morning we awoke to a winter wonderland. She left sunny 40 degree weather in WI to arrive and meet a blizzard with 12 inches of snow and high winds!

Anne Brown, who had hauled her horse all the way from Maryland (5 hours away) got to my house just in the nick of time before the first burst of snowy weather on Thurs. The other long distance traveler, Susie Haubenstock, left Richmond, Va. at 4:30 Friday morning and it wasn't until we woke up later at 6:30 that I had decided to cancel the first day of the workshop. A few people from So. Pines and some people from Hillsborough called to say they couldn't make it.

Even so, Lori Harrison, up in Stoneville, and Terri Aprile, who lives just down the road, as well as Susie from Richmond and Anne from Maryland got to my house and we spent the whole Friday morning watching Nancy trim Anne's horse for a first-time trim and teaching session in my barn that lasted 3+ hours.

After a quick lunch, I drove the four brave participants (Lori, Anne, Terri and Susie), and Nancy down to Carol Lobisser's house in So. Guilford County where Sue Anderson, another workshop participant, met us to watch Nancy trim Carol's two horses. (The roads were clear except for backroads. Later, the sun melted all snow on roadways away by early evening, leaving a beautiful but safe drive home.)

Paco, who was trimmed by Nancy at the Oct. workshop in SC, had abscessed the whole bottom of his hoof completely off! I think it would have scared anyone else, but Nancy who expected it, assured Carol that it was perfectly normal as she expertly trimmed the hoof. Carol was surprised and delighted that there was a whole new decontracted sole, frog and bars underneath. The dead tissue was so extensive because of his extreme contraction from years of shoeing. His new healthy circulation was able to wall off all of the dead corium and get it out as well as grow a new and better sole by way of a major abscess. The whole abscess episode only lasted 3 weeks counting from the time the horse first became sore, to the painful building (which took approximately 3 days), and final breakthrough as well as nursing through till the time Nancy was able to trim away the old loosely attached sole and frog. The horse is walking and trotting evenly now and his attitude is great. The newly expanded sole, frog and bars will soon harden enough to withstand rocky ground easily within the next few weeks. Yeah! I might add that Carol hunted Paco hard on the Sat. before he started to abscess and the good circulation that galloping for 3 hours provided, helped his body to get rid of that nasty dead tissue. 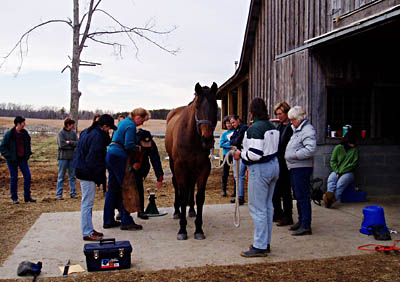 Photo courtesy Carol Lobisser. It shows a So. Pines horse being trimmed in front of Lynn's barn.

Nancy also trimmed Carol's paint horse, Leo, who also has some significant contraction problems but has yet to abscess or go sore.

We all piled into the Suburban and drove down to Liberty to see Sue's shod horses. Nancy did an evaluation on 2 of the horses. Extreme contraction in both, one was an old guy with all of the contraction-related veterinary-diagnosed founder and Cushings "diseases" a trained Strasser hoof care professional would expect with life-long shoeing and conventional horse-keeping practices. A success story in the early stages? Maybe. That remains to be decided by the owner as to whether or not she decides after the workshop to de-shoe and rehab.

We ended the day with the last moments of light looking at Terri's two Arabs out in the field. One is shod, the other recently deshod but both very contracted. She is going to get Anne "Tree" Coley to trim the barefoot one next time through. And too, she's going to have to rethink her whole horse-keeping methods for successful transition to barefoot.

Sat. began with a delay in starting times for the workshop to enable all to arrive safely. However, a few of "the brave ones" got to Lynn's beforehand and watched Nancy do a trim on Patrick, the first OP* horse that I ever trimmed (*OP = Other Person's). I instructed everyone to quietly watch and Nancy was able to trim the horse in about 25 minutes, even with some questions and teaching.

Lynn provided both a perfect place and wonderful food each day as well as a petting zoo. Her camel Humphrey was only too happy to show us all what real hoof mechanism is all about! What, you've never been kissed by a camel? 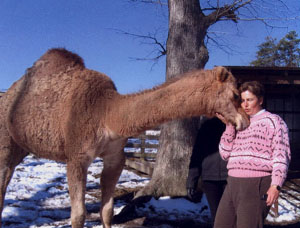 When the rest of the workshop participants arrived, Nancy began her lecture. This is my 3rd time listening, and it so amazes me how much more I learn each time! After lunch and door prize* drawings, we gathered outside around a veritable buffet table of cadaver hooves.(* French Champaign & Begian chocolates given by Billy Judy and a beautiful horse drawing by Anne Brown) 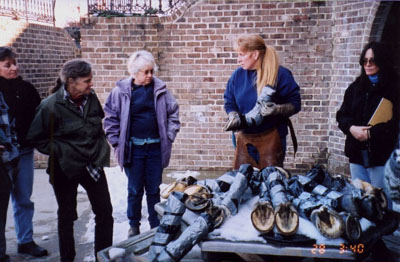 Nancy pointed out the extreme contraction in each and every one of the 25 feet. We watched as Nancy trimmed and dissected a hoof then we all began trimming our own cadaver foot with her supervision. Anne Coley was helpful and everyone learned that it's not as easy as it looks. But there is nothing that beats a hands-on experience in learning.

As dusk turned into night, the So. Pines people headed back home and the rest of us enjoyed a meal that Lynn and some others had prepared. Lori's husband made a great pasta salad and we had some home-made goat cheese from Mary Lee's goats.

Sunday, the last day of the workshop, was spent trimming live horse feet. Three horses came up from So. Pines and one from Hillsborough. There was so much teaching and learning going on! Dinner and a show were provided by Lynn's husband, Brad, and Humphrey. Camel whispering? Is that the same as horse whispering? :-)

I had brought 3 of my horses: my formerly flat-footed, underslung Holsteiner gelding; my formerly foundered pony; and my husband's Paso Fino. I trimmed the pony's front feet and Nancy checked behind me. Then I saddled him up for Anne Brown to ride with Lynn's kids. She later said the pony was happily galloping forward over all terrain. I never expected any less!

I trimmed my gelding and was pleased that Nancy said I had progressed significantly in my understanding and ability to trim properly. I think everyone was impressed by the size and quality of this gelding's feet. I let Carol trim my Paso. Tree and Nancy both checked behind her. 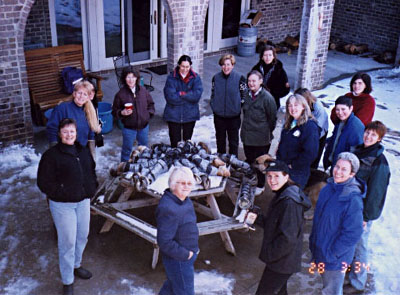 I would appreciate anyone's comments or questions about the workshop.
Happy barefoot riding!