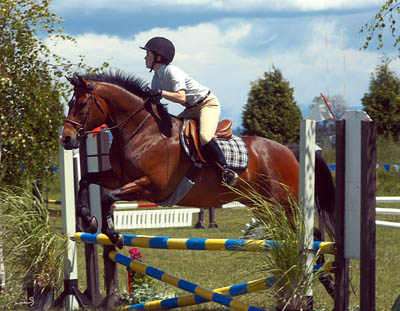 My name is Julia, and I have an 8 year old quarter horse gelding named Beau. I bought him in August of 2002, and planned to show him in hunter/jumpers the next summer, as well as do lots of trail riding and just horsing around.

Around March of 2003, he started going lame all the time, mostly in his right front. The first time, the vet thought he had just bruised his sole, so it was Bute, rest, and easy walking. Next time, the vet thought it was a deep abscess, so we soaked him, to no avail (partly because Beau wanted nothing to do with putting his foot in a bucket of water).

Each time the vet came, he could find nothing specific. So we tried joint supplements, and when those didn’t work, joint injections. He would be sound for about a week, then he would go off again. Also, he seemed to lose his shoes a lot, either in turnout, or while I was riding him, mostly the right front. (Beau’s feet never seemed to grow much in between his 6 week visits from the farrier.) Next, we got x-rays, which showed nothing to account for the lameness.

Then, one day we jogged Beau for the vet (he was “off” again, but we weren’t sure if it was the right front or the left hind), and the vet decided to block his right front. The weirdest thing happened. Without being able to feel his right front, Beau’s left hind went off. After that was blocked, his left front went off. With that blocked, his right hind was the only sound foot! So we had a horse on our hands with one sound foot, and the most frustrating thing was that all his legs and hooves were cool, with no heat or swelling, and no apparent cause for lameness.

The vet diagnosed “navicular,” and we started him on isoxsuprine, to increase the circulation to his feet. Finally, the vet thought we should try therapeutic shoeing. First, we tried eggbar shoes, and then finally, the therapeutic pads as well. This might have worked, except that shoes did not stay on my horse’s feet. The vet said he would never get better, the best we could do was keep him as pain-free as possible and hope that the condition didn’t get worse. He would have to be on the isoxsuprine forever. This was not the life I had planned for me and my horse.

Then my trainer, Allison Bain, who had been through everything with us, said that what she saw was a horse with sore feet and poor quality hooves, and if we didn’t want to go the traditional route, she suggested pulling his shoes and having a friend of hers work on him. Her friend’s name was Miel Bernstein, and she did only barefoot horses.

Miel came out, talked to me and my mom, gave us some books to read about natural hoofcare, told us the pros and cons, and explained what would be involved. The whole process could take up to a year, and we had to be prepared to see Beau get worse before he got better. We both loved Miel’s calm manner and were impressed with her knowledge, so after discussing it, we decided to have her start on Beau the next week (by this time it was June).

If Miel was going to work on Beau, he was going to have to be in a field 24/7, which was fine with me, as it is so much better for them to be outside and moving around with their buddies. The barn I was at did have a field, but Beau could never have been in it before, as he had shoes on. Many people warned us against barefoot natural trimmers and told us horror stories, but this was Beau’s only chance to be sound, and what Miel told us made sense. I didn’t really care what people had to say... and so the journey began.

Beau thrived in the field, and even though it took him some time to find his place in the herd, he made some good friends. For the first 3 months, all I could do was handwalk him (his feet were tender) and soak his feet (for daily moisture and/or because one of his feet was abscessing). Lots of people said the abscessing was a bad thing, and happening because bacteria was getting into his feet from the open nail holes (bacteria is small enough that it doesn’t need nail holes!), but Miel informed us it was most likely that the abscesses had been in his feet and waiting to come out, getting rid of all the dead tissue, and that it was a good thing.

Anyways, with all the soaking, Beau got really good about putting his feet in the bucket, and soon we could soak 2 feet at once, which always made people laugh. Even with the abscesses, we had to make sure Beau kept moving (absolutely no stall rest), and it was amazing how quickly the abscesses came out. Two of the abscesses came out at the hairline, and the third one came out through the bulb.
For pain relief, Beau received a Devil’s Claw mixture instead of Bute. Miel also suggested a daily ration of Riva’s Happy Horse, an herbal supplement, which Beau gets daily. We had stopped the isoxuprene right away. His circulation would improve naturally, without shoes and living in a field, walking around. She wanted him to clear his body of any toxins, and to boost his immune system. I also started giving him biotin to strengthen his hooves. He hated the taste of it, so we had to disguise it in a mixture of bran and water, with a pinch of sugar!

Miel had been coming out regularly to look at Beau, and her assistant, Carrie (who was also great with Beau, and has since become a certified hoofcare professional) came frequently, too. At first, they came every two weeks, and the first time, when they pulled his shoes, they didn’t do any trimming, as first he needed to grow some feet. His soles were flat, not concave, and they were the consistency of butter. Any changes to Beau’s feet were done slowly and carefully. Miel and Carrie were using the Strasser method of natural trimming, which they modified to suit Beau.

After the first 3 months, Miel said I could start getting on Beau and just walking around, which to me was a big deal. I mean, everyone was being great and letting me catch ride their horses once in a while, and I even leased a horse for a few months, but now I actually got to sit on my own horse again! So every day for about a month, I would go out there and hop on Beau bareback, then go and soak his feet. With the long, hot summer, Beau’s soles became so tough that he had to be soaked right before Miel or Carrie could do any trimming! Even so, he was still “ouchy” on gravel. His new hooves were growing in, and the quality looked great.

After this, he started improving more rapidly. I was able to trot and canter him on the track that goes around the farm, and he was feeling pretty good. Then around November, he went off again. Miel and Carrie came out and looked at him, and told us not to worry. Beau’s heels had expanded, which was a good thing, but in the process, they had cracked, which was causing the soreness. He just needed a couple weeks off for the cracks to heal, and after that, we were back on track.

In December, Beau started going over poles on the ground. Every phase of his retraining was done slowly, to get him built up properly. In January, we moved to another barn, where the footing in the indoor arena was much more giving. But, because they closed their fields off in winter, Beau had to be back in a stall, with 4-6 hours turn-out in a paddock. Miel said that, by this point, his feet were just about all grown in and he would be fine.

In January, we started jumping, first crosspoles, then higher. He has been in two schooling shows and done rounds up to 2'9'', with absolutely no problem. He has been on a trail ride in Campbell Valley Park with no ouchiness in his feet. Walking on gravel is no problem.

Now, Beau is still sound, and everyone’s happy about his feet. He has very strong, healthy-looking, well shaped and balanced hooves. Miel and Carrie come and trim him every 4-6 weeks. When the fields open, he will be one of the first to go outside. Last year, the vet said I would never have a truly sound horse, only serviceably sound, but, thanks to Allison and Miel and Carrie, and all the hard work I’ve had to put into him, he is sound. Now I can jump him, go on trail rides, and do a lot of other fun things with him. He is a happy horse. That is the life that I would have planned for me and my horse.

About the author: Julia McInnis has loved horses all her life (she is now 14 years old). When she was a little girl, her dad would take her to a nearby stable to see the horses, and feed them treats. She started taking lessons when she was eight years old, and has been riding ever since.


Note: Photos are provided for reference and educational purposes only, and are not meant to indicate guidelines for trimming. Every horse should be trimmed as an individual. Opinions vary as to what constitutes "correct" but keep in mind - there are NO PERFECT FEET, not even in the wild. Owners are cautioned to seek professional help for the trimming of their own horse's feet. Owner trimming of pathological feet is not advised. Photos may not be reproduced, copied, or distributed in any way.