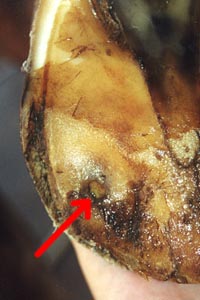 Close-up of an abscess exit hole on the sole.
From The Perspective of a Horseowner
by Rachael Ward

Abscesses ­ If you've been around horses long enough, you've probably experienced the anguish of finding out your horse has an abscess. You've probably been met with much conflicting advice and information, too. Simply put, an abscess is the way a hoof rids itself of dead cells and damaged tissue caused by trauma to the internal structures of the hoof. Much like a boil or pimple, pus forms and festers and sooner or later, out it comes. It can burst through the coronet, the sole, the bulbs, the frog or wherever it finds the easiest path.

Here's where the conflict comes in though. Conventional sources tend to believe that abscesses form when foreign material gains entry to the hoof capsule via a widened white line or penetration of the sole by a sharp object. And sometimes this is the case. In my personal experience, this has occurred when a horse gets a thorn, nail or other sharp object stuck in his sole. But this has been a pretty rare occurrence. Far more commonly, abscesses are the result of damage to the corium WITHOUT penetration of a foreign object. This damage could be caused by solar bruises, laminitis, lack of circulation as a result of incorrect hoof form or shoeing ­ all sorts of things can result in what Dr. Strasser refers to as a "purulent inflammation of the corium".

Here's an example: Your horse has been shod for 5 years and has contracted heels but is otherwise pretty sound. Somehow you hear of the barefoot movement and decide to pull your horse's shoes and go barefoot right away for optimum horse health. You trim your horse's feet with the assistance of a Hoofcare Specialist and afterwards he has fabulous hoof mechanism. Very proud of yourself indeed, you pat yourself on the back for doing such a great job. But, a week or two later your previously sound horse greets you at his gate with a very ouchy right front and an obvious reluctance to walk. Upon further investigation, you notice his hoof is very warm to the touch and he has a slight digital pulse. Now what do you do? Put the shoes back on? Stick him in a stall? Panic? Dig a very large hole in his sole with a hoof knife? Pour chemicals on his hoof and give him lots of bute? Nope, none of the above.

What you should do is the exact opposite. Understand that during the 5 years your horse was shod, damage has occurred inside the hoof and until now the hoof did not have enough circulation to expel it. Your horse needs continued freedom of movement, frequent correct trimming and daily exposure of the hooves to water just as he always has. And to help him out with getting rid of the yucky stuff and keep things clean, soak his hoof for 30 minutes a day in a solution of apple cider vinegar and water. (About 3 tbs. to a hoof boot of water) Within a few days he should be feeling better and you'll probably find an exit hole either in the sole or the coronet, don't be too impatient though ­ a really big abscess might take as long as a week to burst (sometimes even longer).

The timetable for complete healing of an abscess varies, if you are concerned that the abscess is not healing as it should or think that you may have misdiagnosed the problem ­ be sure to contact your Hoofcare Specialist for further assistance. Horses who have had laminitis, severe contraction, navicular syndrome or other serious hoof problems may suffer from frequent abscesses for up to two years. 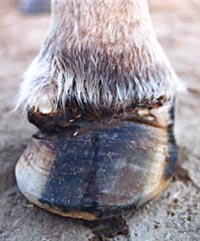 This hoof shows abscesses draining from the coronary band. (The swelling on the left side is not from an abscess, but from a corium prolapse resulting from a coronary grooving.)
Hoof Abscesses
By Dr. Hiltrud Strasser

A hoof abscess is a purulent inflammation of the corium, where the pressure produced by the accumulation of pus between the corium and the hoof causes the horse great pain and leads to pronounced lameness. Hoof abscesses occur both in shod as well as unshod horses. In the following, we are only considering the unshod hoof.

According to conventional educated opinion, a hoof abscess occurs when the horse has pierced the sole with a foreign object-that is, the abscess occurs through infection from the outside.

Hoof abscesses, however, only very rarely arise due to external infecting agents. More commonly, the following occurs: Corium or lateral cartilage areas, which have been compressed for a long time, die off. After circulation is returned to these areas, the dead pieces of tissue are removed from the living tissue and carried to the outside by pus, since the dead pieces of tissue cannot be transported away through the microscopically small blood vessels of the corium.

The process is very common in the transition from shod hoof to barefoot.

When contracted hooves open, sole and heel abscesses must be expected. They are predominantly found in the area of the heels and bars, and sometimes also by the frog, especially near the tip. They also form in places where shoes' clips are, and near the rearmost nails. Often excessively long bars which have grown over the sole cause pressure points which later become noticeable as abscesses.

It provides the horse with some relief from pain if the abscess is found and opened by an expert. A small round hole cut in the right place allows the pressurized fluid to drain. The abscess is then cleaned with a mild disinfectant, and the hole closed with clean loam, clay, or healing earth. Bandaging is not necessary-quite the opposite, it can be damaging because it restricts circulation. The horse should be let out onto a soft and level pasture or paddock. Movement on soft ground is helpful as it increases blood flow into the hoof, allowing for quicker healing. After 24 hours the hoof should be bathed, the cleaning repeated (with chamomile tea, for example), and the hole again closed with clay. Then the hoof should be left alone for two days. Arter three days, the corium will be covered with a whitish-yellow skin, the newly-formed sole horn. After one week the sheet of horn will already be thick enough for the horse to walk smoothly on even ground. For sharp stones, however, the sole requires two further weeks of growth.

Sometimes a hoof abscess cannot be found, for example if it is deep in the heel/frog/bars region. In this case, rather than cutting away a large part of the sole or frog (it would be a long time before the horse could bear weight on this foot again!), applying bandaging and leaving the horse in a box-as is often done-one should wait until the abscess finds it own way to the outside. Poultices with warm linseed mush, which soften the horn, are helpful. The pain will lessen as soon as the pus comes out by the coronary band; however, this can take a few days.

For several days afterward, one should bathe the hoof daily in water with a bit of fruit vinegar. Natural hooves with normal circulation (and therefore good blood supply) are very regenerative.