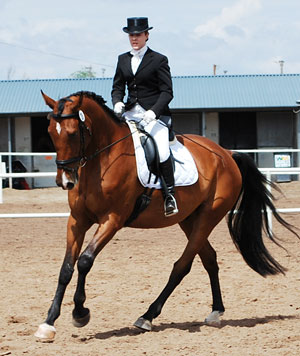 I’ve been very fortunate in being able to own some amazing barefoot horses. I’ve had some “average” horses that have gone on to perform to above average standards. In the past, I have only been able to afford rescue horses, including one mustang mare (Sally), and 3 PMU rescues (Orion, Primo, and Indra). All of these horses have come to me barefoot, although some of them came with quite a few “hoof” issues that took a while to correct. With Natural Hoof Care, I have seen my horses do some amazing things, perform VERY well, and do what most Dressage/Jumper trainers didn’t think my horses would be able to do. They not only did it well—but did it barefoot.

About a year ago, I had a client come to me with a lovely warmblood gelding by the name of Hermes. She put Hermes in training with me to bring up the levels in Dressage. Hermes was in shoes during his time in training with me, and he’d been in shoes since age three. He was always sound while shod. However, he did have a weird “twist” in his right hind that used to really bother me, but again, he was “sound.” He had always been a VERY floaty mover, at least in the beginning.

After having Hermes in training with me for a year, his training began to get more and more difficult. We were asking a lot of him, as we were now starting to ask for more collection, more leg yields and shoulder-ins. While introducing these things to him, his attitude began to change. He started to get more and more resistant to doing the leg yields and shoulder-ins. He was sound, but I felt like all this new work was taking a toll and becoming uncomfortable for him. My only conclusion to his resistance was that he was uncomfortable in his feet. It’s hard to tell horse owners that their horse’s feet may be bothering them when the horse is technically “sound.” Hermes’ movement was also beginning to change. The only way I can describe it is that he went from being a lovely floaty, light on the ground mover, to a “clumpy, flip-flop” mover.

After having Hermes in training with me, his owner came to me with an offer I couldn’t refuse. I ended up purchasing Hermes for a very reasonable price, with the obvious intent of making him my top Dressage/Jumper horse. After purchasing Hermes, I did the first thing that any Natural Hoof Care person would do... I took off those metal shoes!!

Hermes has always been a very sensitive horse, and I anticipated him being quite sore... and he was. He was very sound on soft arena footing, but hard ground, or any size pebble or rock was too much for him. I kept him in a large 150ft x 300ft pen with my other horses. Hermes and my younger colt Orion, hit things off well. Orion always made sure to chase Hermes around the pen. It was hard watching sometimes, because Hermes wasn’t 100% comfortable on his feet, but I knew that movement would change that.

After about 6 months, Hermes was very comfortable on almost all terrain—still touchy with rocks, but otherwise perfect. The twist in his right hind became less noticeable, almost nonexistent. He was, once again, a lovely, floaty, light mover. After 9 months, he is now almost completely sound on any terrain. Large rocks are still a bit touchy, but considering he is not ridden or living on any rocky surface, he does very well. His feet are beautiful!! 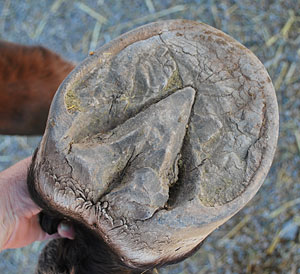 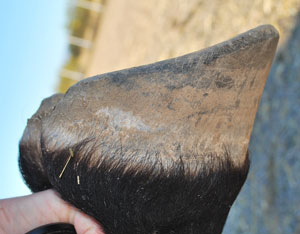 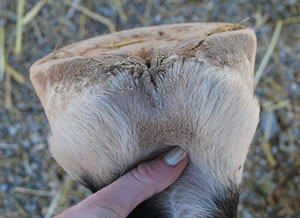 Hermes’ hooves, after being barefoot for 9 months. Catherine is also his trimmer.

Hermes has competed at 6 Dressage shows since I have owned him. He has won or placed in all of his classes, scoring all the way up to 74% in Training Level. Hermes and I also qualified and competed at the USDF Regional Championships in Albuquerque, New Mexico, in November of 2009, where Hermes was Champion of the Training level OPEN division with a great score of 71%. Hermes also competed at our local State Championships here in Arizona where he placed Reserve Champion with another great score of 69%. At the State Championships, Hermes competed at First Level for the first time, earning his first Regional Championship qualifying score at First Level Test 4 with a 71%!

This horse has impressed so many. I was told that Hermes was too long in his body to be able to collect well or do the lateral work of Dressage well, but now he is proving everyone wrong, and doing it easily and willingly. I was also told that, because of his long body conformation, he would find it too hard to do the collected movements of the upper levels of Dressage... now I am being told that he has all the potential. 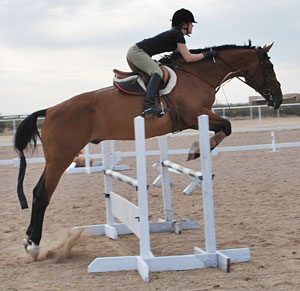 Hermes is also quite talented in jumping!

Our Mustang pony, Sally (CF Angioletta) has also made quite a scene in Dressage. Sally is a 6 yo 14h Mustang mare, and I purchased her as a companion horse for my gelding, Primo. I never expected she would be doing so well on the competitive Dressage scene. She is currently showing 2nd and 3rd Level Dressage. Sally and I just competed in our first 3rd Level test ever. Sally helped earn me my USDF Bronze Medal by earning scores of 60% and higher at 1st, 2nd and 3rd levels. 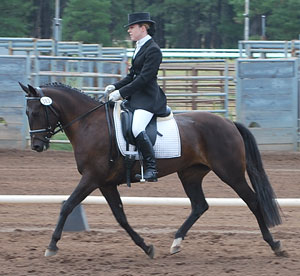 Sally and I recently competed in our USDF Regional championships at 2nd Level in the OPEN Division, where she placed 5th in a very competitive field, earning a good score of 64%. She also placed 4th in our local State Championships with another 64%. This pony is doing so well, we are very confident that she will be able to do Prix St. George and even Intermediare I... although I’m starting to think this pony can do anything, and would not be surprised if I end up writing an article in a few years about our Mustang doing Grand Prix! It’s amazing what BAREFOOT can allow any horse to do... especially an average horse. 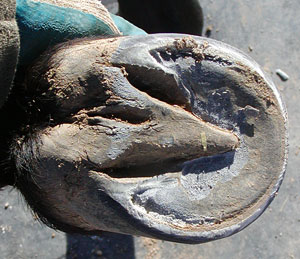 About the author: Catherine Chandler is a jumper/dressage trainer in Wickenburg, Arizona. She loves riding her barefoot horses, whether it’s at a show or just playing around on the trails! She has a variety of students and horses that come train with her, and has even converted a few of her clients into doing natural hoof care, with great results!


Note: Photos are provided for reference and educational purposes only, and are not meant to indicate guidelines for trimming. Every horse should be trimmed as an individual. Opinions vary as to what constitutes "correct" but keep in mind - there are NO PERFECT FEET, not even in the wild. Owners are cautioned to seek professional help for the trimming of their own horse's feet. Owner trimming of pathological feet is not advised. Photos may not be reproduced, copied, or distributed in any way.

©2010 by The Horse's Hoof. All rights reserved. No part of these publications may be reproduced by any means whatsoever without the written permission of the publisher and/or authors. The information contained within these articles is intended for educational purposes only, and not for diagnosing or medicinally prescribing in any way. Readers are cautioned to seek expert advice from a qualified health professional before pursuing any form of treatment on their animals. Opinions expressed herein are those of the authors and do not necessarily reflect those of the publisher.