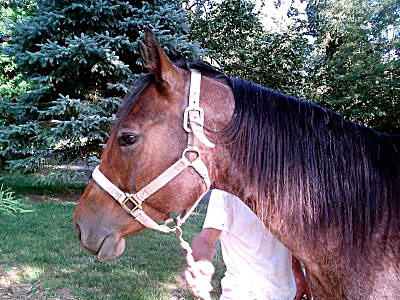 It all began in 2002, when I was working for a prominent Western Pleasure trainer here in Missouri.  She came across a pair of Quarter Horse stallions that were by her wonderful stallion, who had recently passed away.  She had the stall space for one of the horses, but with her large number of show horses in training, she did not have the space for both horses.  She asked me if I was looking for an excellent stallion prospect.

I had 20 acres of pasture full of mainly rescue horses, but I was looking for a stallion and trail riding partner.  I knew her stallion (this horse's sire) was an excellent roping horse and just a wonderful gentleman to work with.  I jumped at the chance to own one of his sons.
When the horses arrived at her barn two days later, we had no idea of the condition they would be in.  They were both very thin, with numerous cuts and scrapes, and large patches of hair missing.  Manes and tail were matted to the roots, and their hooves had never been touched in their 14 months of life.

We had already agreed on which horse I would get, and which horse she would get.  We had no idea that the horse I had "dibs" on had his eye gouged out, and was recovering from a broken jaw.  He was also infested with parasites, and was losing his hair due to mites.  I just couldn't bear the thought of him going back to where he came from, so that's when Hotrod Hancock became mine.

I knew I needed to get him healthy before he would ever be able to stand for the farrier.  He wasn't even halter broke, so getting him used to me took quite some time.  After about 6 months, I felt he was in good enough condition and tame enough to stand for the farrier.  Now, keep in mind, all through this gentling and feeding process I had never so much as raised a hand to this horse.

The farrier came out to trim Hotrod.  His feet were in terrible shape, with large chunks missing and cracks going into his coronet band.  He was very sore and the cracks into his coronet band were infected and oozing puss.  The farrier came and he was late and grumpy.  He had just came from a farm where he had trimmed several colts.  It was getting dark, and he was running short on time and patience.  Hotrod danced around for a little bit, because the farrier did not take the time to introduce himself to Hotrod, or work his hands slowly down his legs.  He just pinched his cannon bone and jerked!!

Now, Hotrod is a sensitive boy, and was not used to this treatment!  I tried to tell this to the farrier, but he just said he "didn't have time to train my horse."  I told him he didn't need training, he just needed to slow down.  Well I guess that was it for the farrier's patience.  He hit poor Hotrod upside the head with his shoeing rasp!

Now I'm not a violent person, but the things I said and the threats I made to that farrier had him running back to his truck!!!  He ran so fast he left his rasp on the ground!!!  This was the last time I ever let a farrier work on one of my horses.

The next day I started over with Hotrod's training.  I knew the farrier had traumatized him so badly that we would need to start from the "ground up" again.  Surprisingly enough, Hotrod picked his feet right up for me, and held them like he had done it a million times!!  I knew he needed his feet done, but boy, I sure didn't know how to do it!!!

I started by visiting several barefoot trimming websites.  I also joined some of the barefoot trimming Yahoo groups.  I had so many questions, and asked everyone I could find an e-mail address or phone number for!!!  Never once was anyone impatient or rude towards me.

Since I still had that farrier's shoeing rasp, I figured I might as well give Hotrod's hooves a shot.  Heck, they couldn't get any worse!!!

That next morning I headed out to see Hotrod.  I had a stack of pictures, step by step directions, and a cell phone to call my "help line".  Let me tell you, that day was exhausting!!!  It never occurred to me that I didn't have to trim ALL FOUR feet in one day!  And I never even thought of getting a stool to sit on!  Not to mention that the wind was blowing and kept my pictures and directions flying all over the farm!!!

Hotrod stood perfectly for me, a far cry from the nervous, prancing horse the farrier saw.  We finally got all feet trimmed, and, if I do say so myself, I did an excellent job!  I had relieved so much pressure just by removing some length and flares Hotrod was like a new man!!

After a few months, the oozing cuts in his coronet band had healed completely.  The cracks in his hoof wall had completely grown out.  Hotrod could walk without pain, and start under saddle work!  Since that day, Hotrod has always been barefoot trimmed.  He has turned into a beautiful horse.  He has a long flowing mane and tail, a beautiful, shiny roan coat, and he and I have a bond like no other horse I've ever owned.

The first day he was saddled he rode off like an old ranch horse.  As a 3 year old stallion, he went on strenuous week long trail rides.  He has been used for lessons, parades, and lots and lots of trail rides!  When he hears my voice, he runs to the pasture gate to greet me.

I have since gelded Hotrod -- there are so many wonderful horses that need homes, I didn't feel the need to create any more.  Hotrod did make some beautiful babies though.   I believe that the many hours of trimming Hotrod's hooves and bringing him back to good health have only help to strengthen the bond between he and I.  He is truly my best friend. 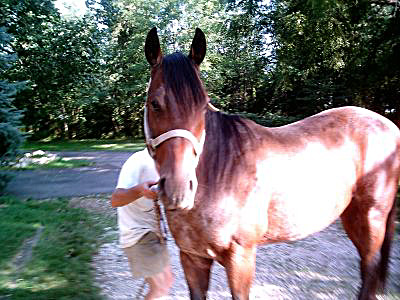