Tory came to me in the spring of 2005. Her owners had her mother, and Tory was born and raised on his farm in Idaho. For ten years, Tory and her mom “hung-out” in their lush pasture, on a self over-feeding program, and lived basically untouched.

The first part of January, 2005, Tory's owner (who is quite elderly) called me up. It seemed that Tory's mom wasn't doing so well, and he knew that the time had come to end her suffering. He didn't want for Tory to live alone, and he also admitted that he couldn't handle her anymore. He went on to tell me that she was a registered Arabian with impeccable breeding, ten years old, never been ridden, hardly halter broke, never been in a trailer, and heck, never even been out of her pasture! Sounded like an interesting project! I told him I'd come over and meet her.

My first thought when I saw Tory was “she's huge!” She was one of the tallest Arabian mares I'd ever seen, not to mention that her fat rolls kept moving long after she'd stopped. She was fat! She had a crest that most stallions would envy. Well, I had a “diet corral” and figured she'd learn to love beet pulp and grass hay. Tory was a gorgeous grey with huge intelligent eyes and she had a confident air about her. Her owner tearfully told me of her breeding and bloodlines, while Tory trotted and showed off out in the pasture, and of how Tory was what he'd always wanted in an Arabian, and how hard it was for him to part with her.

Well, I found out shortly just hard it was going to be to part Tory from him! It took better than half an hour just to run her into a smaller area. Then another half an hour or so to catch her! She'd run and buck, her heels flashing and throwing snow. Tory would barge her way through me, bumping into me and pushing me out of the way. Well, lots of groundwork, I thought, as I followed her around trying to convince myself that this was not a mistake. When I finally did catch her and led her carefully out on the driveway, I got my first look at her feet. And how she was managing to run and play like that without falling flat on her pretty little face was beyond me! Tory looked like she could have participated in the long jump skiing events! I had never seen feet like that where the horse wasn't lame or hurting.

I set out to lead Tory to her new home, where I set up her dry lot and let her get to know the rest of the gang over the fence. I started Tory's groundwork the next day, eager to get her feet trimmed. She really threw her weight around, but was catching on to the “new rules” of no more pushing me around and stepping on me. She always tested me though. After about a week, I got to give Tory her first trim. She'd jerk her foot away and lean on me, certain that I wasn't certified to be messing around down there. But when I gave her back her foot…after the heels were lowered, the bars passive, and her foot balanced and level, she stopped. Looked at me kinda weird, then shifted her weight around a bit. Then Tory gave me this look like; maybe you do know a thing or two. She let me take that same foot up on the stand, with a lot less fight about the whole thing, but she was still watching me. She looked skeptical, she really did! I finished backing up her toe and gave it a rocker, put it back on the ground and her whole expression changed! Tory let out this huge sigh, dropped her head, and just RELAXED. Tory didn't even bat an eye while I did the other front foot, she kept that same head lowered, relaxed look about her the whole time. She KNEW. She knew right away that what I'd done made her feel better. Tory did give ma little trouble the first time I did her back feet, but again once she put the first foot down, she'd get it! I have had lots of horses appreciate getting their feet back, but Tory showed it the fastest. Tory became a different horse.

Now, I thought that Tory could move out before, but let me tell you, she found a new gear! Tory would rip and tear around our pasture like her tail was on fire! She would lead the others in races, which ended in bucking and rearing and pirouettes. Tory took to her new balanced diet, lost weight, started looking like a mare again (instead of a cresty stallion) and is the picture of beauty as she runs around and shows off, just because she feels so good. I pony her around the paved and gravel roads by my house and she has never had a bad step. I keep her on a four-week trimming program, and sometimes I pull up her before pictures and am just amazed at the difference. Tory has been a great barefoot project. She had never been shod before in her life, but she still had great obstacles to overcome. Tory's lack of handling, and size made it hard to get a traditional farrier to trim her. The fact that her feet were allowed to grow so long and the hoof capsule to slip so far forward made it a challenge to bring back without doing too much too soon. Tory will begin her under saddle adventures next year and will no doubt take right to being a trail horse. She'll be beating down the Idaho trails, barefoot, and happy! 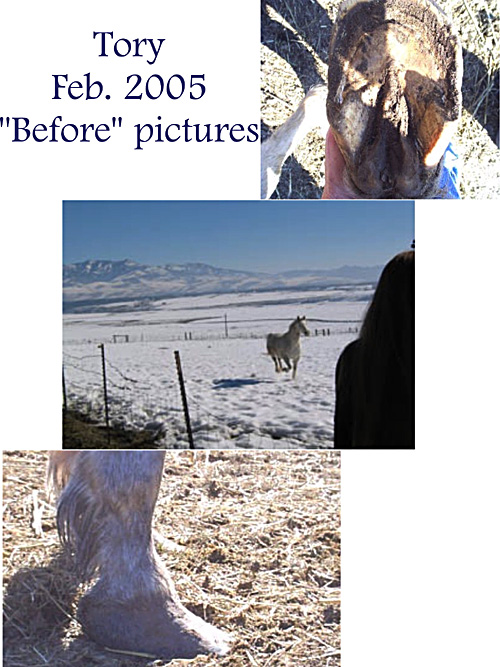