This picture of Jack was taken this past summer, a year after his founder episode. 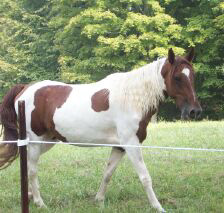 I have nine horses, but my grade gelding, Jack, is the most special. He just has a personality that is so friendly, he is everyone's favorite. I had horses as a teen, then was horseless for thirteen years, and he was the first horse I got when I was able to get horses again last year, after my fiancee and I bought our farm.

My fiancee, Tom, had never been around horses, but he was a willing learner. Three months after we got Jack, I had to go back to our home state to wrap up some things we didn't get done before our move. I showed Tom how much to feed the horses, who ate where, etc., while I was gone the 3 days. The day after I left, Tom called and said when he went down to feed that morning, Jack was in the feed room --Tom had forgot to latch the door the evening before! I was horrified. I told him to call our vet immediately, that I was worried about Jack foundering. Tom said "Well, he's acting fine." It's good that I was 600 miles away, or I might have hurt him! I told him the effects of founder can take a while to show up, so call the vet!

Well, the vet came out, and Jack got mineral oil, banamine, and, of course, everything else she could do. I came home the next day to a very ouchy-hooved horse. I was devastated, I was mad at Tom, even though I knew it was an accident, and mad at myself, even though I knew I had to go away for a few days.

It turned out Jack's hind feet were the most affected. He was stall-bound and had meds applied twice a day, and a hay-only diet. Jack was usually a very happy and friendly horse, and although he tolerated everything, he just wasn't his usual happy self, and I could tell he was in constant pain. The vet said she felt he may need heart-bar shoes, and if he wasn't better within a week, she would do x-rays and then decide if he needed the shoes. All my horses are normally barefoot, but I didn't know what else to do. I never had a horse founder before.

Well, it so happened, my farrier was due to come that week anyway, and I showed him Jack, and told him what happened. My farrier has never been to farrier school, but he has more years experience with horses than I've been alive! He said Jack didn't need shoes, he trimmed him and told me to have him start walking a little each day, that he hadn't foundered very badly and he would be fine. I had my doubts, but did start having Jack come out and walk a little, and although he still seemed a bit ouchy, he seemed glad to be out of the stall and seemed a little better each day.

As of now, a year and a half later, you can't even tell Jack foundered. I don't know if he had any rotation, as I never had x-rays done. But I'm so glad for my farrier and his knowledge, and I really think his advice is what helped Jack get back to his happy, sound self again! Oh, and I did forgive Tom, and I have trusted him to feed the horses again -- but now we have a different latch on the door, so that the door won't close if you don't latch it!