Step by step trimming photos of a monthly maintenance trim by James Welz. 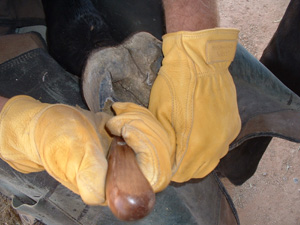 Shorten the bars as needed, and trim distinctly separate from the sole. 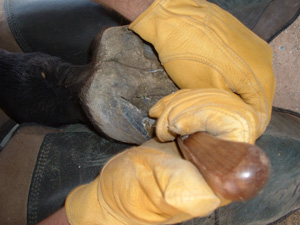 Careful attention to accurate bar trimming can make a big difference in your horse's comfort.

In a maintenance trim situation, there will be very, very minimal sole removed!

Lightly trim sole only directly around the frog, simply smoothing it over, and removing only dead, flakey sole. Do not trim into the "live sole" or "new sole," which has a firm texture. In most cases, do not trim the sole callous in the front of the hoof in any way, and most of the sole should be left untouched. Most horses need their soles left as thick as possible. Why is any sole removed at all, then? Why not just leave the sole competely untouched? In nature, the horse would take care of this by themselves, through movement and moisture (exfoliation). In captivity, this area of the hoof becomes overgrown (just like the heels do), and when it fills in, it will often cause soreness. We trim this way because it makes horses sounder. Lightly trimming this area should not cause any tenderness - if it does, you have removed too much. 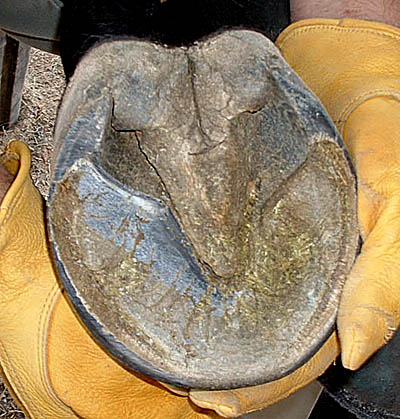 Left side has bars trimmed; right side untrimmed. The bars should end midpoint down the frog - the reason is that the bar corium also ends midpoint down the frog, so any bar past that area is overgrowth. In nature, the excess bar usually breaks off or flakes away (and if it doesn't in captivity, the horse needs our help!). Bars are trimmed to be fairly straight, and the bar is trimmed separately from the sole (don't remove sole while trimming bar, because you may remove too much sole!!) The sole right next to the frog is just barely trimmed to smooth it over, but it is not thinned in any way, nor is it trimmed to dirtline.

Notice that the heel-bar area forms a solid platform in the back of the hoof (also called the heel buttress). There is a curve to the back of the bar - the bar is fairly straight from mid-point to where it unites with the wall, then there is a natural curvature to the heel platform (this is also a trait seen in many wild horse hooves). The horse bears its weight on the heel platforms and the frog. This horse has an easily observable heel-first landing at all gaits. 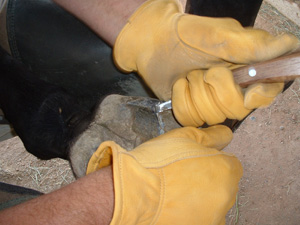 Other bar is trimmed. 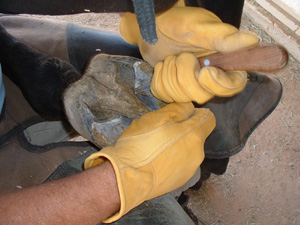 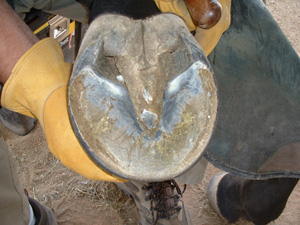 Sole is finished. Touch up frog only if necessary. In this horse's case, nothing needed to be removed from the frog. However, if the frog was extremely overgrown, it would probably be trimmed to be passive at the apex to full weightbearing at the heel bulb. We tend to remove very little frog, these days.

On a healthy hoof, the frog usually covers about 2/3 of the length of the sole of the hoof. It should appear full and robust. 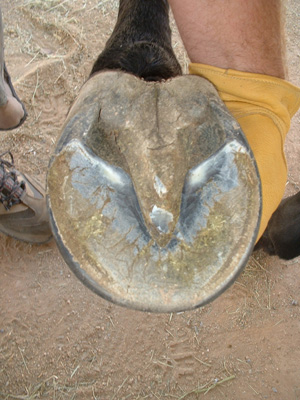 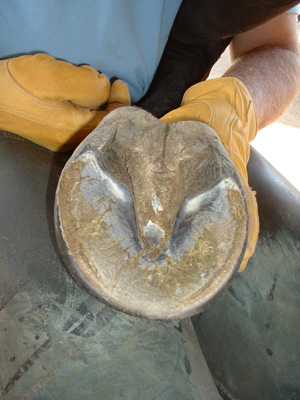 Here is an example of the importance of photo angle - keep this in mind when you look at photographs. Same hoof as above, same day, only difference was the position of my camera!