Fred was a horse belonging to a local summer camp here in western NC. He’d been donated by another local camp when he could no longer meet the demands of their riding program. The camp he was given to had an easier program geared towards beginners. He was a quiet and gentle gelding with easy gaits and didn’t have to have anyone leading him. He was a welcomed addition.

During the early years Fred did well with no obvious signs of lameness. We were told he had ringbone in one front leg. After about 4 seasons Fred began to limp at the trot but seemed fine when walking. The camp shoes only the front feet during the summer and allows its horses to go barefoot during the winter months. They have 24/7 turnout during the off season as well. When Fred showed signs of limping egg bar shoes were used during camp and pulled afterwards. Camp seasons generally run about 10 weeks. He seemed to do better with the egg bar shoes. Heel wedge pads were added later when he began to limp with the shoes. After about 2 more seasons Fred couldn’t walk without limping while wearing the shoes and he would always point his left front foot while standing. They were also leaving the shoes on year round thinking he needed them. It was about this same time I had heard about Jaime Jackson and Dr. Hiltrud Strasser. I read Jackson’s HOG and Strasser’s LOS and wanted to try using their methods to help Fred. By this time I’d been trimming horses for 5 years for other people and myself. I asked the camp for permission to take Fred for the winter so that I could work on his feet. They agreed. 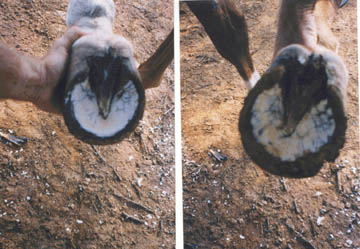 Fred's feet with shoes pulled and soles cleaned up a bit but walls untrimmed.
Left foot (white one) was the one Fred would point when standing.
This was also his smallest foot being up to .5" smaller in
diameter than his right front foot.


It was mid August of 1999 when I pulled his shoes and did my first attempt using the new Natural Hoof Trim. I took a lot of hoof off Fred’s feet and lowered his heels. He was very tender afterwards but I knew to expect this. I did not give him any medications and left him outside with his buddy. The camp had allowed me to take another horse that was also lame. He’s another story. It was 5 months before I began to notice any progress and it came in the form of Fred walking with less trouble. I even saw him trot a time or two and on rare occasions buck up a bit with a few steps of canter. This was encouraging to me after all those months. I was still having trouble with contraction in all four of his feet though and his worst front foot was still smaller than the other one.

In May 2000 I signed up to attend a Strasser 3-day Basic Hoof Trim Seminar in Chickamauga, GA. It was then that I realized how much I’d missed when reading her LOS book. I couldn’t wait to return home to begin putting those missing parts to work.

Fred returned to the summer camp for the last session that ran the first 2 weeks of August. He was barefoot and able to walk and trot with only a slight limp. I was hoping the camp staff would notice his improvement but was told they wanted to find him a home since they felt he wasn’t going to hold up. I tried to place him with one of my students but when that failed I spoke up for him myself. He was given to me in August of 2000. I continued to trim his feet regularly using my interpretation of a natural trim. He continued to improve despite the ongoing contraction problems. By the summer of 2001, I couldn’t see him limp at all, and he was now pastured with sound horses that could run and buck. I decided it was time to begin riding him. 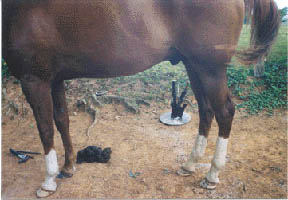 Fred's feet after the first trim in August 1999.

I had a teenaged student who was interested in riding him so I had her come out for several weekends and watched her ride him. I had my camera handy also and took photos of him at all gaits. When downloading the photos and viewing them I studied his joints and amounts of flexion in his worst front leg and could see more movement in his fetlock. This was exciting because when I first took him his fetlocks had been steep for so long they barely flexed upon weight bearing. I was also impressed by his way of going. It looked to me as if he’d been western pleasure show trained at one time but thankfully not during the era of the "peanut rollers". Words could not express my feelings as I watched this horse going through his paces without a hint of limping. He’d come a long way in 2 years. Here was a beautiful gelding that in 1999 seemed to have no future carrying around a rider once again and looking happy and sound. It was a wonderful sight to see. 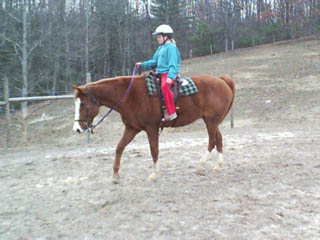 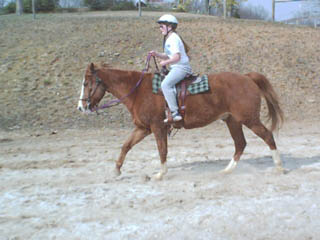 Margaret, the girl riding him at the jog is the one who is leasing him this summer. The girl cantering him, Marisa, is her friend and former student of mine.

Since that day, Fred has been leased out for the summer to another teen while she visits her grandparents for the summer. She has taken him to a 3-day 4-H Horsemanship clinic, a week long riding camp at a local stable, entered some classes in a local horse show and spent many hours just riding and enjoying having a horse to play with and love. Fred is a success story and the first horse of many whom is proving to me that the barefoot work of Strasser and Jackson works!

Another note, Fred will be back at the summer camp to fill in during the last 2 weeks again this year. I am looking forward to hearing the camp staff comments on how well he holds up this time. (Grin)

Thanks to Fred, the camp now sends me other horses with hoof problems. The latest was a 7 yo TB with navicular that had been donated to them. Started trimming him in September 2000 and he returned to camp the first of June 2001 sound. He took less than 8 months to grow out entirely new feet! If this keeps up, the camp will no longer have to worry about lame horses being donated to them in the future or maintaining sound horses as they age. This is definitely a fringe benefit! 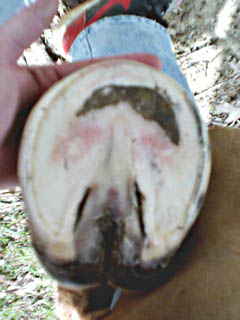 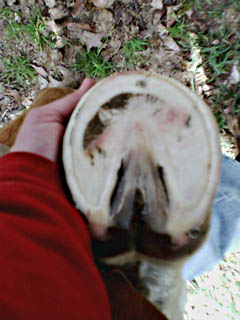 It’s almost been 4 years since I first pulled shoes from Fred’s feet and began the rehab journey with him. I felt it was time to update his story to let you all know how his life has been going.

As of mid August 2002, I turned over ownership of him to a local Forest Ranger named Tim. Tim had been a former student of mine back when he owned another gelding which subsequently put him in the hospital following a riding accident. He gave that horse away knowing he needed something safer. I’d had Tim in mind when Fred was looking for a home back in August 1999, but at that time he wasn’t looking for another horse. Patience and time pay off though and now he was looking. Fred would be perfect! So the agreement was signed and Fred went to Tim with the understanding I’d get him back should he be unable to keep him. 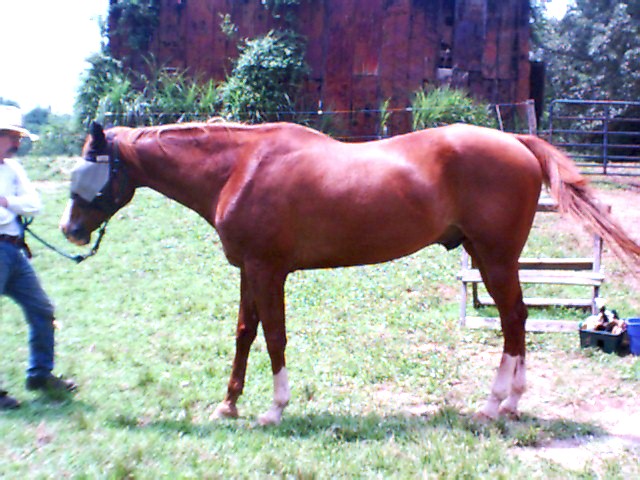 Tim understood Fred’s rehab needs and continued to allow me to trim his feet. He also understood the lifestyle needs and had a fairly natural environment already. The pasture had firm footing, a run-in type shelter and room to exercise nearby when it was time to ride.

About this same time I heard of another camp horse being retired for hoof problems. Fred had worked with this appy gelding for many years so it only seemed natural to inform Tim of another quiet horse that would suit his needs. What luck, he was ready for a second horse!

Fred and Cochise are quite happy together and thriving in their new home. Cochise had been stumbling and going to his knees at times while working at the summer camp. He’d also been loaned to a local High School for their Horse Science Classes along with 2 other camp horses. He just wasn’t safe any more. I plan to write his story soon.

With the purchase of a truck and trailer, Tim can now haul either horse to the National Forest to enjoy trail riding. Both horses are kept barefoot and doing very well. He’s careful to avoid the worst rocky sections of trail but has been starting to condition their feet to adapt. Fred is now called Redbo which is short for Red Boy. He still has nagging issues of heel contraction but his left foot appears to be almost the same size as his right front. Having attended a couple of Nancy Filbert’s hoof trimming workshops nearby I have learned my heel/bar trims weren’t quite right. This could be the key to getting Redbo’s feet to de-contract at long last! We’ve also noticed him beginning to point his Right Front foot. I can’t help but feel that all the years that foot spent compensating for his left have now caught up with him a bit. With my increased knowledge and skill I hope to remedy whatever it is that is bothering him in that foot. He’s come such a long way I would hate to see him lose any ground now. 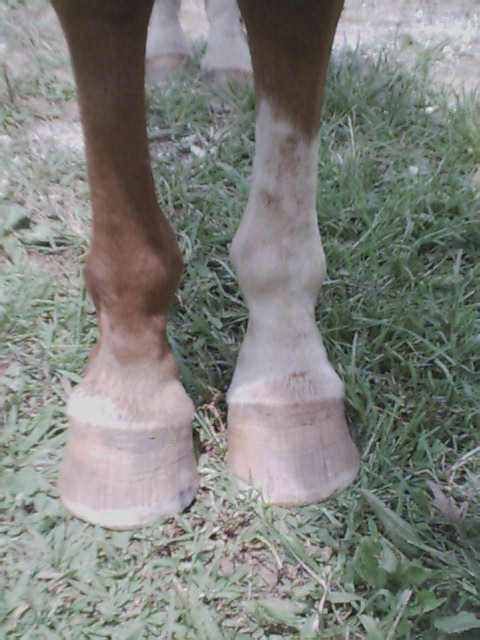 Fred spent so many years taking children for rides and now in his later years he’s able to help adults too. Tim had many fears after his riding accident and spending months in the hospital in addition to home recovery gave him time to reflect on it. Fred’s quite nature and steady personality have worked wonders on Tim. Riding is now a joy once again in addition to the quality times spent grooming and caring for his two horses. Who could ask for more?

--"Tree" Anne Coley lives in North Carolina and can be contacted at : ovrdunit@aol.com