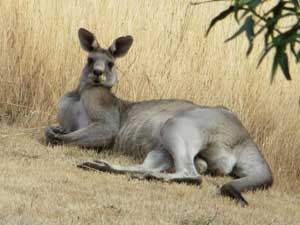 The Horse’s Hoof is going DownUnder in November 2014!

The Horse’s Hoof is going DownUnder in Fall 2014 for a major international conference on natural hoofcare. It’s The Functional Hoof Conference Australia 2014, to be held in Daylesford, Victoria, from Nov. 6th thru Nov. 9th.

The organizers are casting the net wide to entice delegates from around the world. Such is the caliber of the offerings that they have already attracted international bookings.

James Welz, co-owner of The Horse’s Hoof (along with his wife, Yvonne), has been invited to participate in “A Table With All The Trimmings”* and panel discussion. Three trimmers and three farriers (James has been invited as one of the trimmers) will trim cadaver legs which will be sagittally dissected and freeze dried, to go on display at the conference. There will also be a panel discussion involving the participants, allowing them to elaborate on the reasons behind their particular trim.

The conference, organized by trimmers Rebecca Jacaranda Scott (of GoBarefoot–The Hoof Trim Network) and Zoe Messina (of My Healthy Horse) will bring together an inspiring collection of equine researchers and practitioners from around the world.

Headlining the program is Dr. Hilary Clayton (formerly Mary Anne McPhail Chair of Dressage at Michigan State University). She will be talking about biomechanics and her research with Professor Robert Bowker on horses trimmed barefoot. From Sweden comes Professor Lars Roepstorff (Swedish University of Agricultural Sciences). He will be presenting on hoof ground interaction and varying footings & how they affect performance. Dr. Debra Taylor (Auburn University, Alabama) has confirmed her availability. And Dr. Andrew Van Eps, a protege of Professor Chris Pollitt at the University of Queensland, who was recently inducted into the International Veterinarians Hall of Fame in acknowledgement of his research on laminitis. Other speakers include Dr. Cindy Nielsen (Founder Warriors, Nevada), Dr. Neal Valk (“Should We Really Ignore All Patho-logy?”), Georgina Pankhurst on her brand new thesis on heel angles and hoof health, Jane Myers on sustainable horse keeping, and Carol Layton on the science of nutrition.

This is the second Functional Hoof Conference that Australia has hosted. It’s a long way to go, but knowledge can be priceless. Besides, it’s a great excuse for a holiday in Australia afterwards! And professional development is tax deductible...

For further information go to the conference website: www.thefunctionalhoofconference.com

* “A Table with all the Trimmings" is based on Allie Hayes’ original freeze dried cadaver selection of comparative trims by leading farriers and trimmers which was showcased at the American Farriers Association annual convention in 2002. Thanks to Horse Science http://www.horsescience.com and American Farriers Journal which has more hoof-care information available at http://americanfarriers.com

November 6-9, 2014 - The Functional Hoof Conference 2014
Daylesford (Melbourne area), Victoria, Australia
Speakers include Dr Hilary Clayton, Dr Deb Taylor, Dr Neal Valk, Prof Chris Pollitt, and many more. James Welz will be featured on a trimming discussion panel, with his trimmed hoof in a special exhibit (“A Table with all the Trimmings”), and so Yvonne & James will both be there!
Save with Discount early bird tickets through June 30th!!!
http://www.thefunctionalhoofconference.com

©2000-2014 by The Horse's Hoof. All rights reserved. No part of these publications may be reproduced by any means whatsoever without the written permission of the publisher and/or authors. The information contained within these articles is intended for educational purposes only, and not for diagnosing or medicinally prescribing in any way. Readers are cautioned to seek expert advice from a qualified health professional before pursuing any form of treatment on their animals. Opinions expressed herein are those of the authors and do not necessarily reflect those of the publisher.